It was plus 5 and dry first thing this morning.

It was another fine day yesterday, but windy.

I spent a few moments last night walking the fields where we turn our horses out to monitor grass growth.. none of note yet.. But..

Archie starts back at school this morning and it is all change ..on line lessons..

I fear it might be quite a shock to his system.. Late out of bed am and late to bed pm has been his holiday routine.. all change as his first lesson on my computer at home starts at 8.30.. Maths is the first lesson after lunch this afternoon.. Fractions like his aunt..

In todays Racing Post they have rewound the clock and have reposted Alastair Down’s excellent obituary of the famous Irish trainer Mick O’Toole.

I was a big fan of Micko and stayed with him several times when I first started training..

Micko was a phenomenal saleman and great fun to be around..

One day he rang to tell me that he had a lovely horse heading to the sales at Goffs who had won a bumper at Leopardstown and then gone on to finish 6th at the Cheltenham Festival.

I flew over and stupidly I fell in love.. with his horse..

Then I did what you should never do, and that is spend far more than you can afford.. I specked 60.0000 Irish punts on a horse called Biloxi Blues

Buying Biloxi Blues was certainly a shock to my little world.. he was a huge price and although a lovely looking grey, he was always going to be hard to sell, because he was so expensive.. .

I really struggled to find anybody who was remotely interested, even though everybody loves a grey.. Young trainer .. expensive horse.. not a good combination?

I was cutting my grass outside my yard in East Ilsley one summers evening, when an American (Jim Chromiac) stopped and asked me for directions to Andy Turnell's yard....

Without being rude to Andy, who I got on very well with, but sensing an opportunity, I asked Mr Chromiac into my kitchen and offered him a cup of tea while I looked for my map and drew directions to help him find where Andy trained .. it was about 8 miles away..

After tea and a chat I suggested to Mr Chromiac that he might like to have a quick tour of my yard and see my horses.. he agreed..

We went slowly round, as I only had 12 horses at that stage of my training career..  we eventually came into the last stable, and guess what was inside that stable..Yes the stunning grey Biloxi Blues..

My guest was over awed by such a magnificent beast..

I took the slight hint and told him the story as how I had bought him ''on the recommendation of the great Mick O'Toole' and yes he was for sale... and we thought the world of him..

No more was said, and we bid our goodbyes.. Jim Chromic left with a pedigree and a brochure and set off to Andy Turnells yard..

A couple of days later Jim rang to see if I still had Biloxi Blues for sale....Of course I did... and that was the start of Pell Mell Partners..

Biloxi Blues did Pell Mell Partners proud..He ran 36 times winning 11 and was only unplaced 9 times..He finish 4th in the Galway Plate under Brendan Powell and again 4th in the Grand Steeplechase Des Flandres (Handicap) in Belgium..Their Grand National To watch

Biloxi Blues won a flat race at Newmarket as prep race for Galway.. I remember Henry Cecil telling me before the race 'not to make a fool of myself by running a jumper in a flat race on the July course'.. When he won Henry said... 'please don’t take up flat racing..!'

BB was looked after by Caroline Harcombe who now runs riding holidays in Spain.

Pell Mell partners.. Jim Chromiac and his brother-in-law Richard Gilder became a big force in jump racing and had some very good horses over the years including Katabatic..

Fate..I am a great believer....I had some very happy days with Jim and Richard...In Galway, Waregem, America and many other places..

'I was on the committee of the Bud Flanagan Leukaemia Fund in 1993 and met Kim at Windsor races one charity evening.

I persuaded the Fund to buy a horse on the basis there were no outgoings which Kim kindly donated as did Weatherbys and Norman Williamson. He cost about £8k and was by Le Moss. We named him The Bud Club after the fund.

We ran 5 times winning once at Musselburgh and placed each of the other times, then selling him for £12k to an existing owner at Kim’s the following season.

We auctioned “be an owner for the day” at a boxing night and Kim went into the ring for the bidding which raised a couple more grand. Never seen him so nervous with 500 dinner suited punters watching him ! He did well though, but declined putting on some gloves!

That year the fund presented a cheque to the patron HM The Queen Mother for £1m which was a lot more money in those days.

A small part of that was down to Kim- thank you again. ' 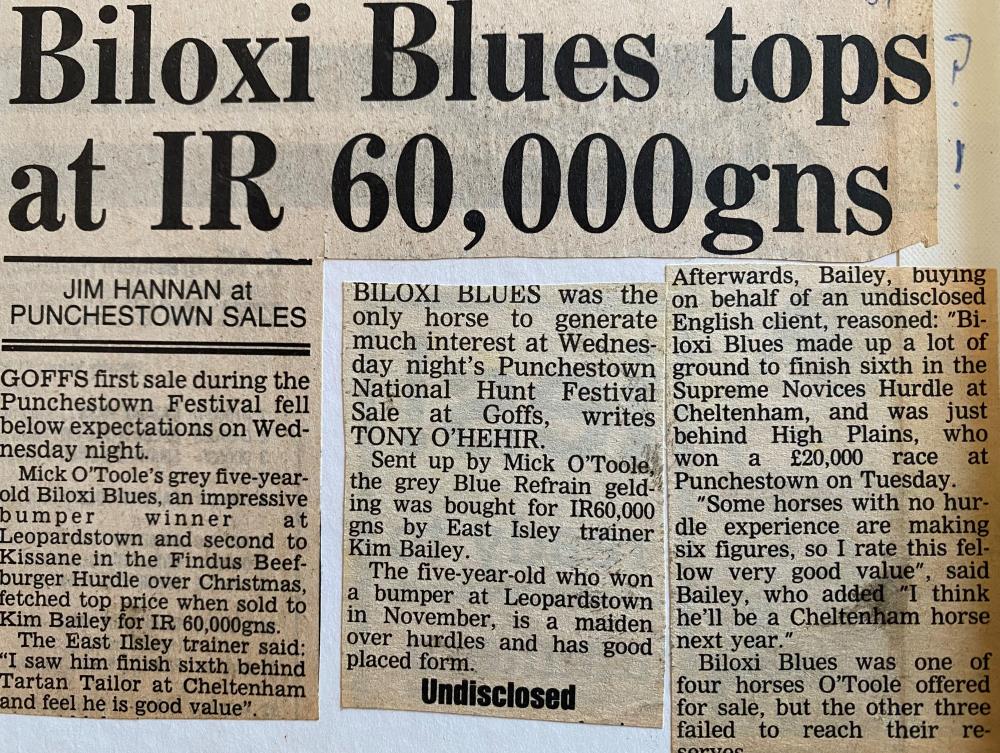 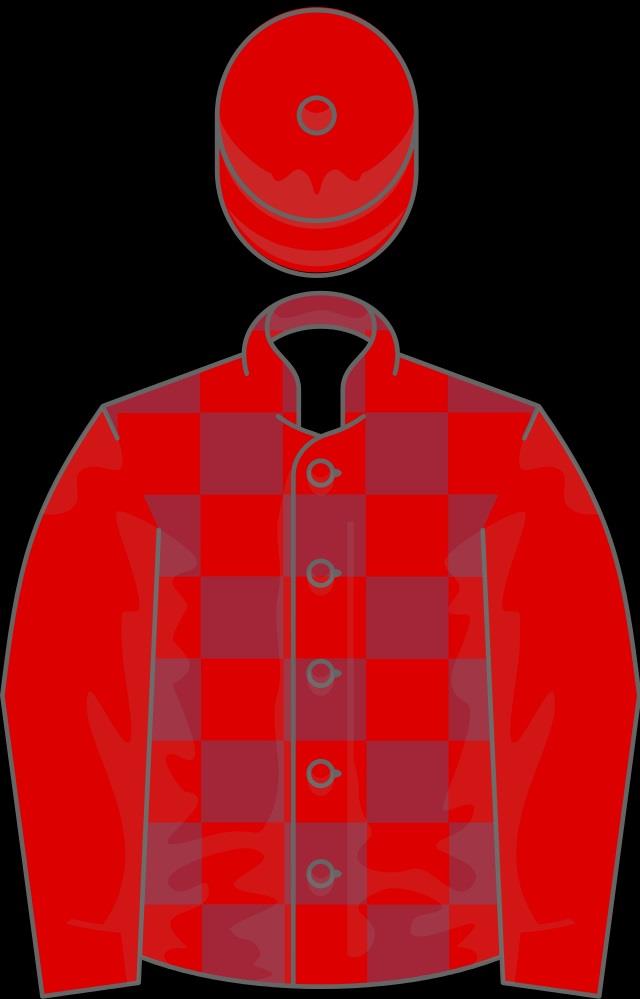 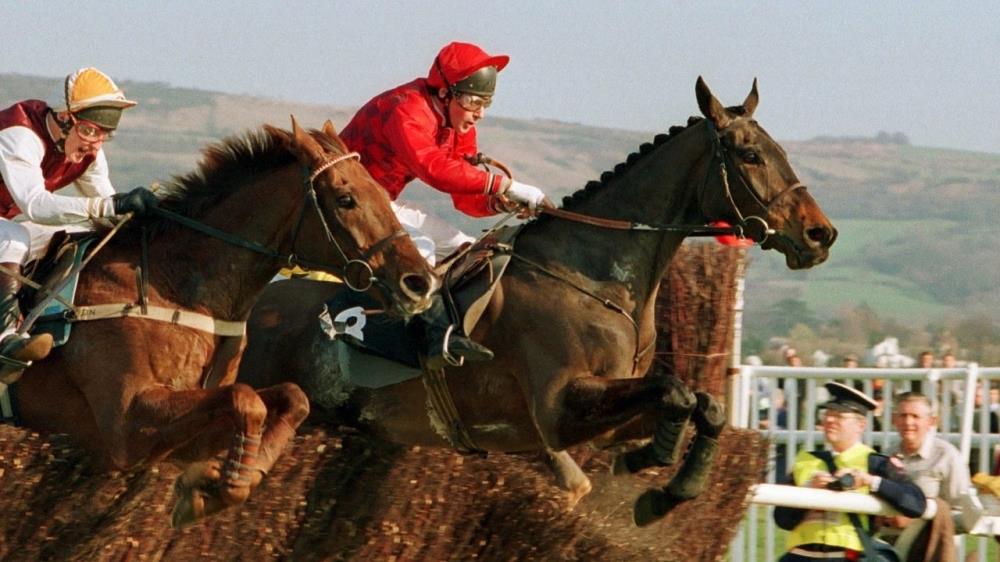 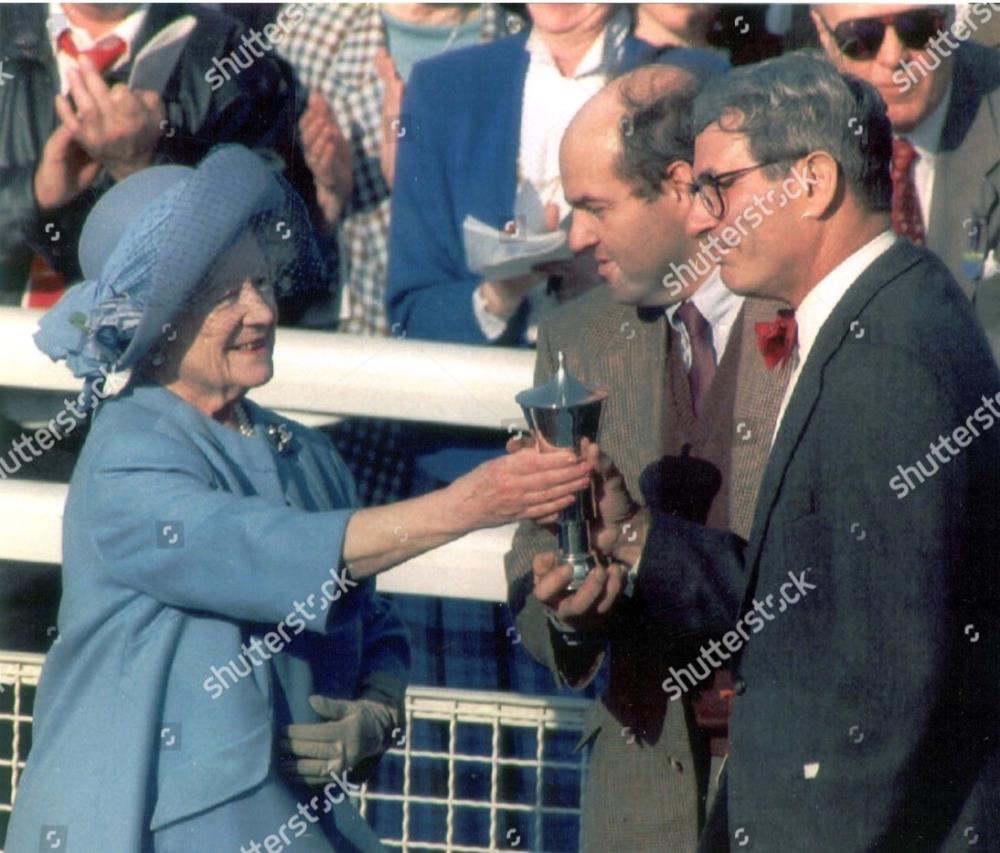 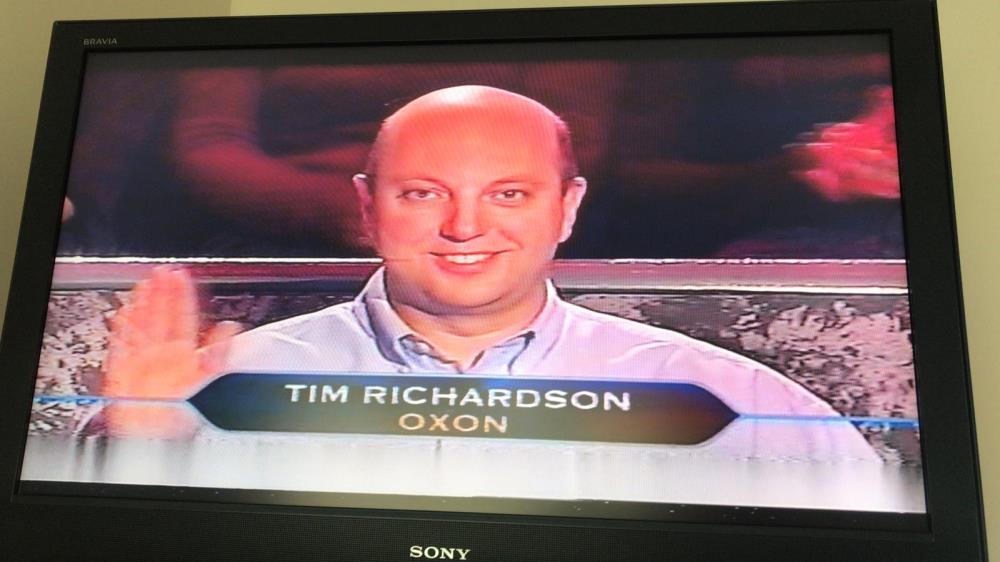 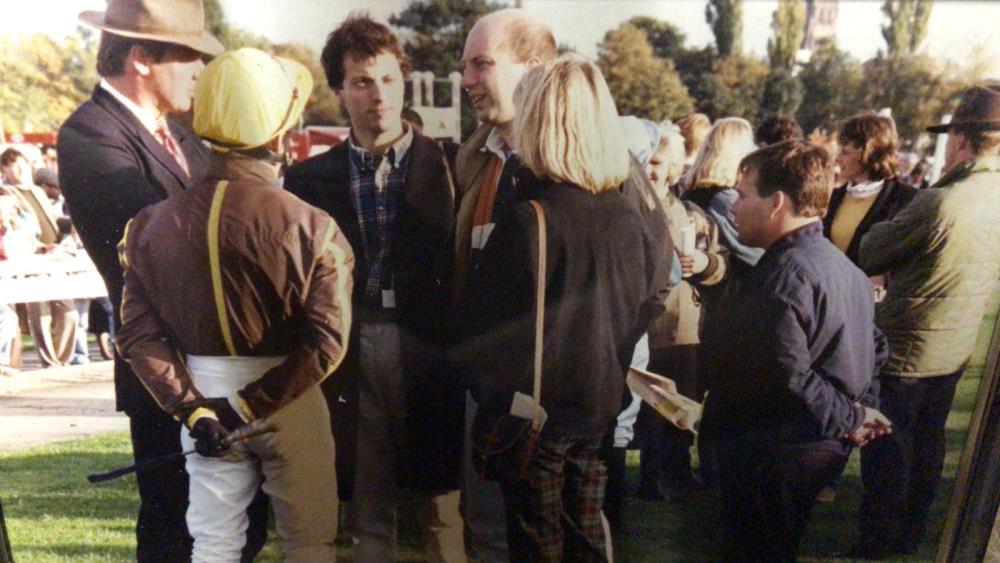 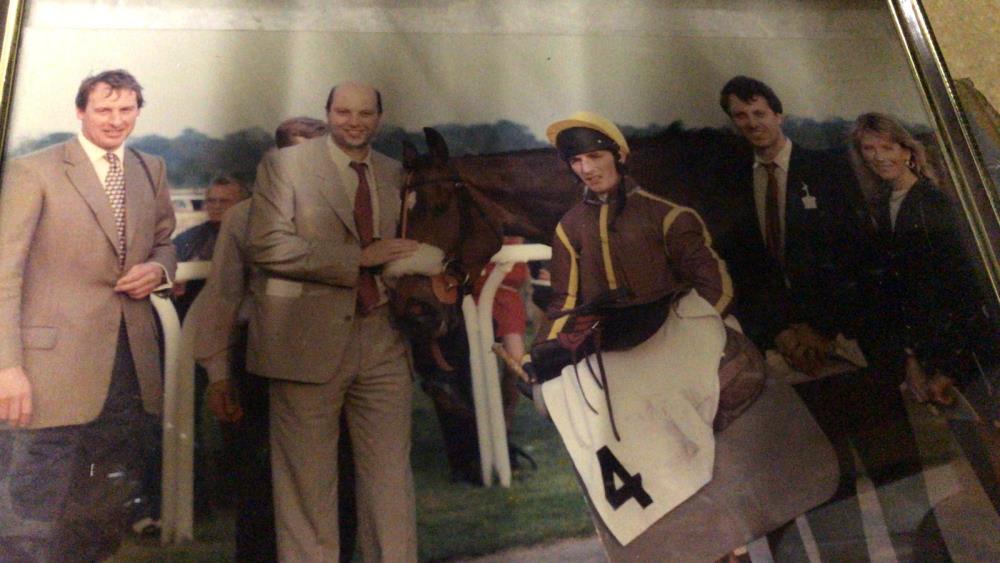 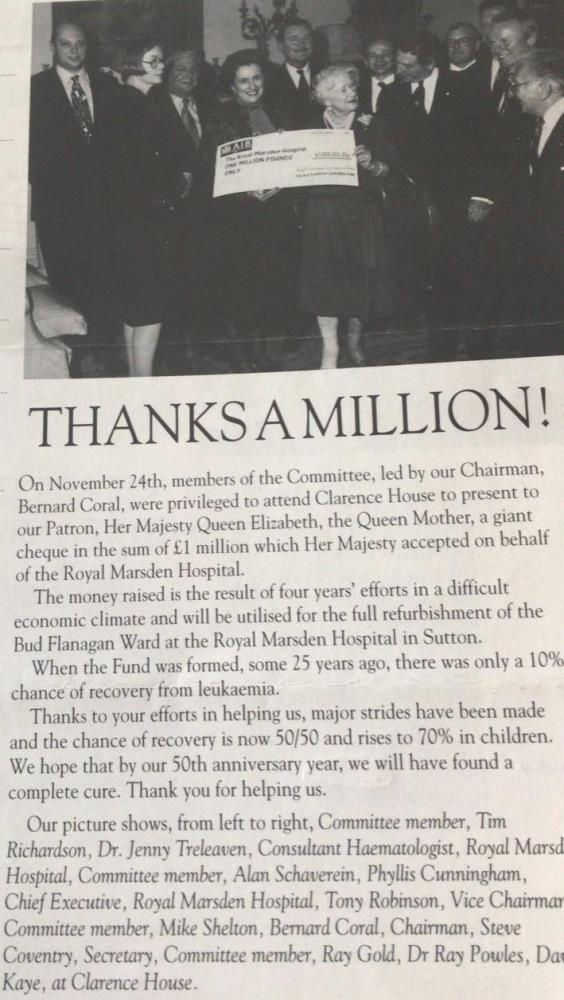 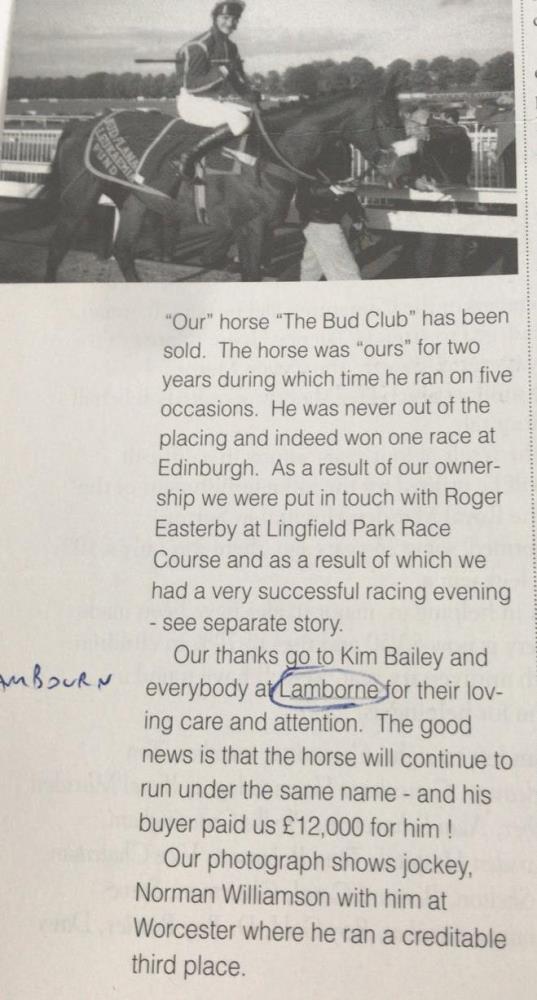 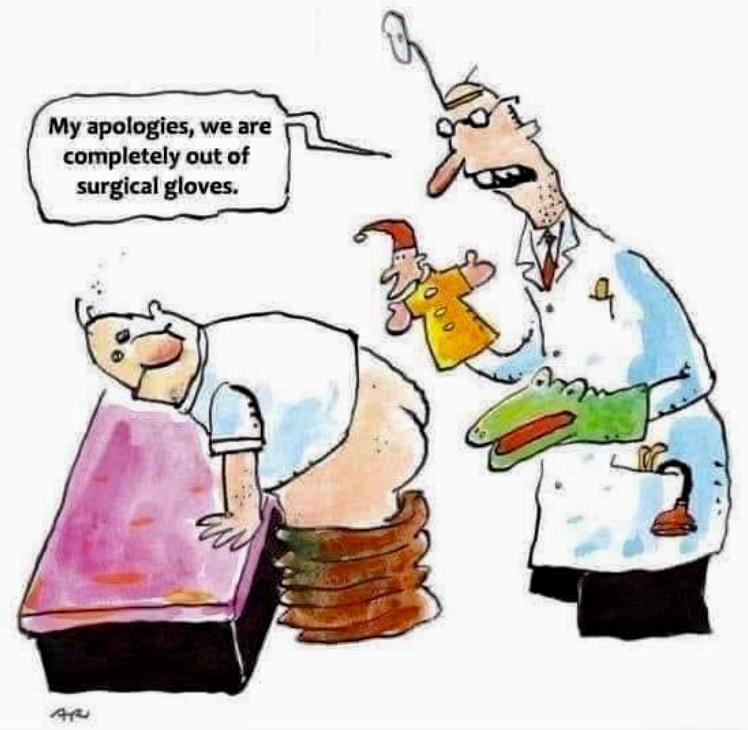