Not a bad weekend in/at the office. 3 winners, 2 seconds, a fourth and an unplaced from our 7 runners..

Lets start with Stratford on Saturday

2 out of 3 which on the face of was good but.. you have to read past the headlines to really understand the day.

The Bull McCabe won his first hurdle race like a progressive horse.

This big son of Yeates, who had won a Irish point to point was always travelling well and frankly won well. A future chaser who won the race that Happygolucky won last year..

Owned by Park View which is the racing name for John and Laura Garrett.. It was their first ever winner in their own colours (they do have shares in several of our KBRS).. It was an exciting moment for them and much deserved as they have been very patient with their horse.

Mon Palois ran a blinder on ground that was probably tight enough for him.. He finish a fast finishing 4th and looked back on track after a dismal run at Newton Abbott.. So Elizabeth and Paul Kellar and I were pleased with MP..

We all thought she was probably well handicapped and on form had an outstanding chance..

Any thoughts of winning almost went out of the window when she jumped the first so badly that she went from upsides in front to last.

Things did not improve as she continued to jump badly.

With ¾ of a mile to go she was still last and although still relatively in touch, winning looked well ..remote…. But David Bass does not give up or give in and he keep pushing and asking and DG responded and gradually she crept closer..

She came wide into the straight about 15/20 lengths behind the leader and even jumping the last she had little chance, but David kept pushing and DG responded.. and blow me she got up on the line to win by a length.. staggering stuff all round…

Norman Carter, DG’s owner, nearly had a heart attack.. but in the end it was  staggering ride on a very tough mare who gave her owner the one of the most enjoyable moments in his racing career.. Fun! Watch the end of the race here.......David Bass post race interview

Stratford looked after us well and as I went as an owner it was good to have all three owners with me ..

Ffos Las yesterday was a totally different experience.. Wales and in lockdown.

Owners facilities consisted of 4 park benches outside and a table serving soup and tea/coffee plus sandwiches in the fridge. We were not allowed to sit inside, even though there was huge amount of space to do so..

The ground was tacky and on the soft side. Lady Of The Night was on the face of it disappointing as she finished 7th.. but she was flat out and in time it might show to be a very good race and that she ran ok.. There will be better days for her..

Lots of Luck jumped off virtually in front and was hardly headed .. he won well and yesterdays win made it 3 wins out of 5 over fences for him… His owner John Perriss was thrilled and that made up for the run of LOTN..

Champagne celebrations were held in John’s car, in the designated owners carpark .. Penny Perriss and I shared John’s winning bottle and added the luxury of M&S sandwiches bought on the way down..A salubrious way to celebrate a win?

We had a long wait for the last race to watch Getaweapon run a blinder to finish second in the bumper and while waiting we watched Dandy Dan run a stormer off top weight to finish second in the Durham National at Sedgefield…. Tough act and he gave the winner 25lbs.. and demolished the newly rebuilt last fence to boot.. Phil and Gill Andrews were rightly proud of their horse...

Yes a good weekend..And all the horses are fine after their excertions..

Eye test this morning.. How exciting is that.. need to be able to read the small print?

After too many beers, my mate asked if he could crash out on my sofa. I had to explain to him that I'm married now, so that's where I sleep. 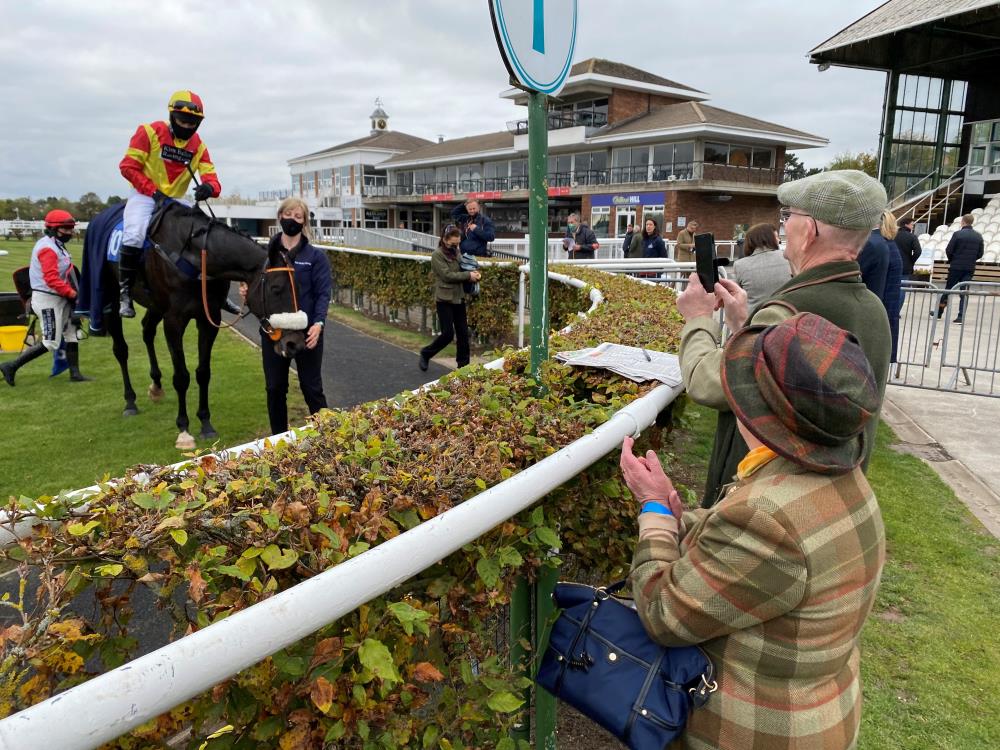 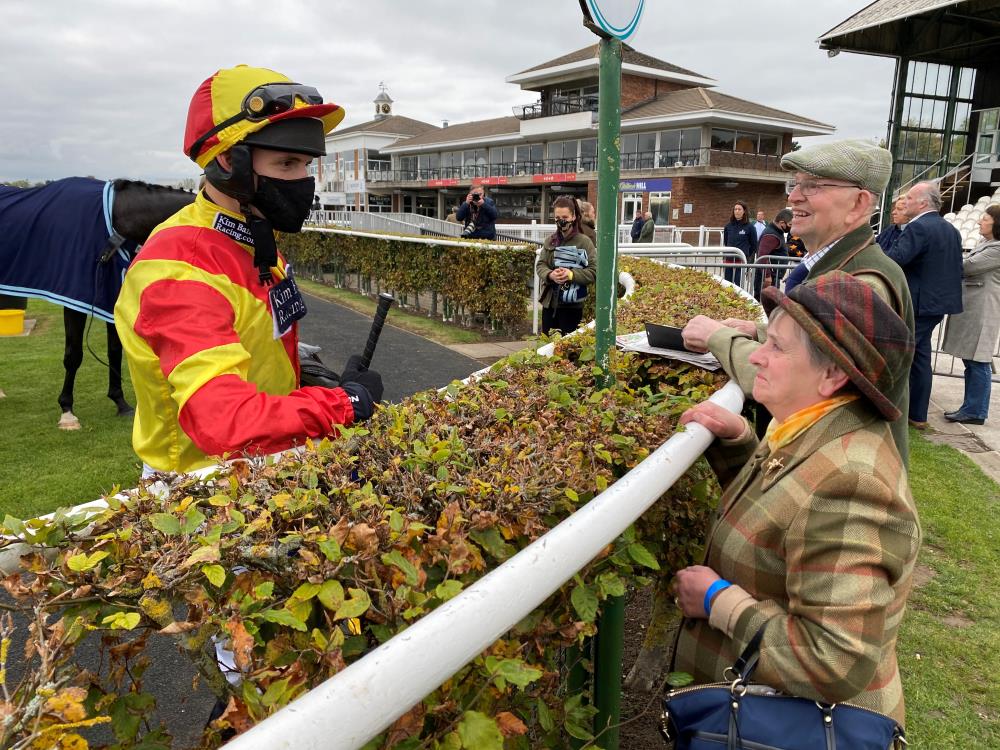 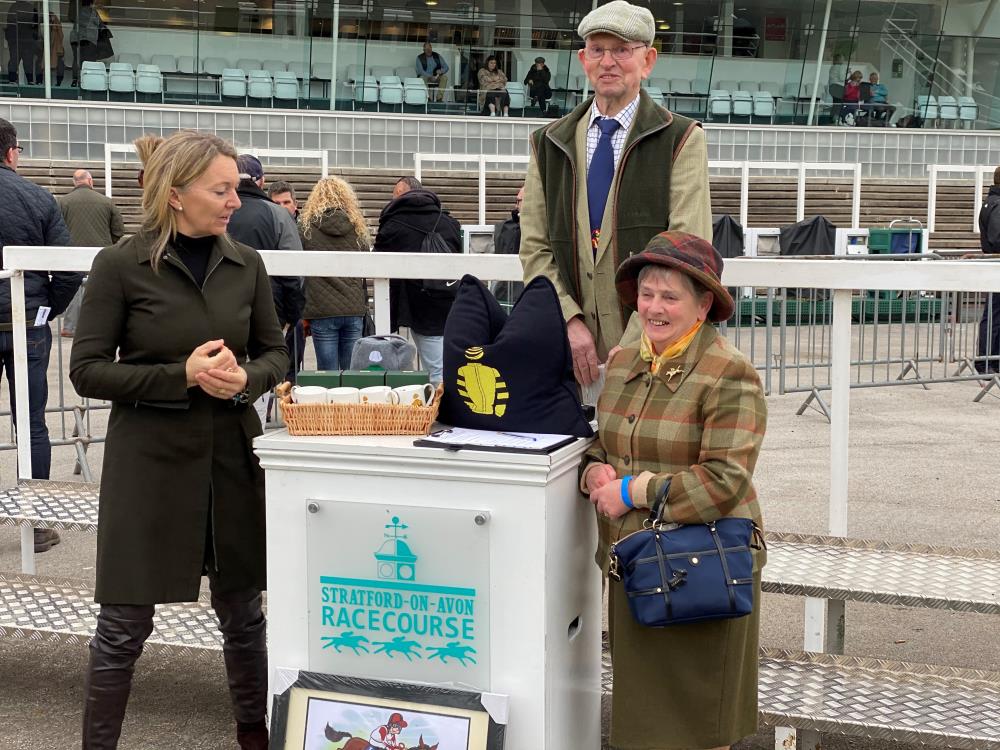 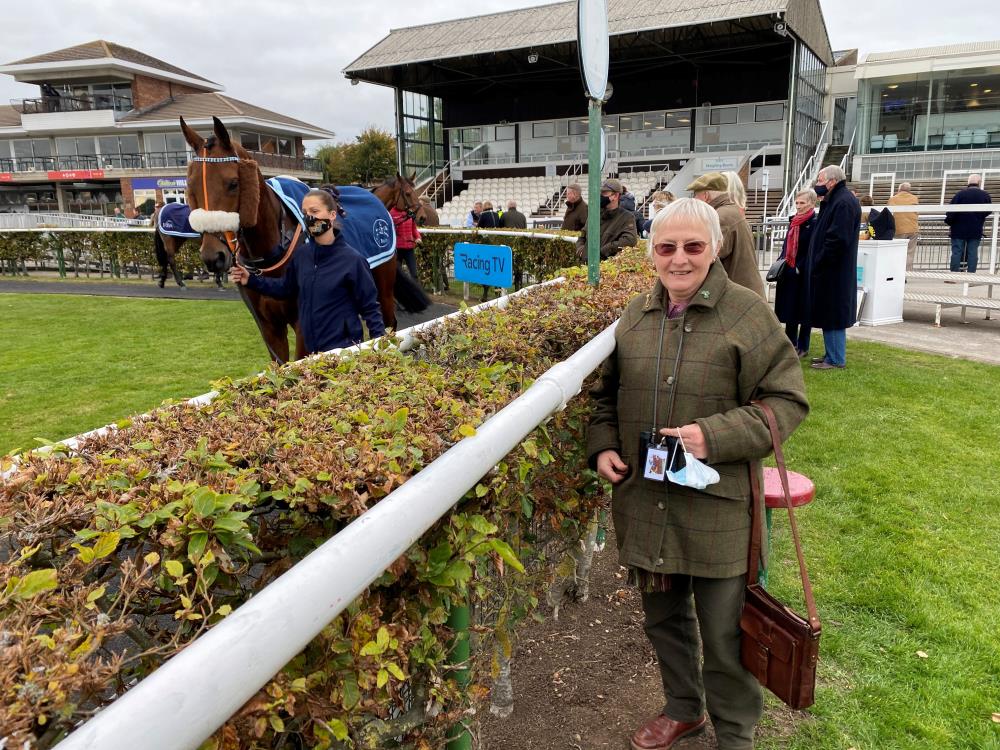 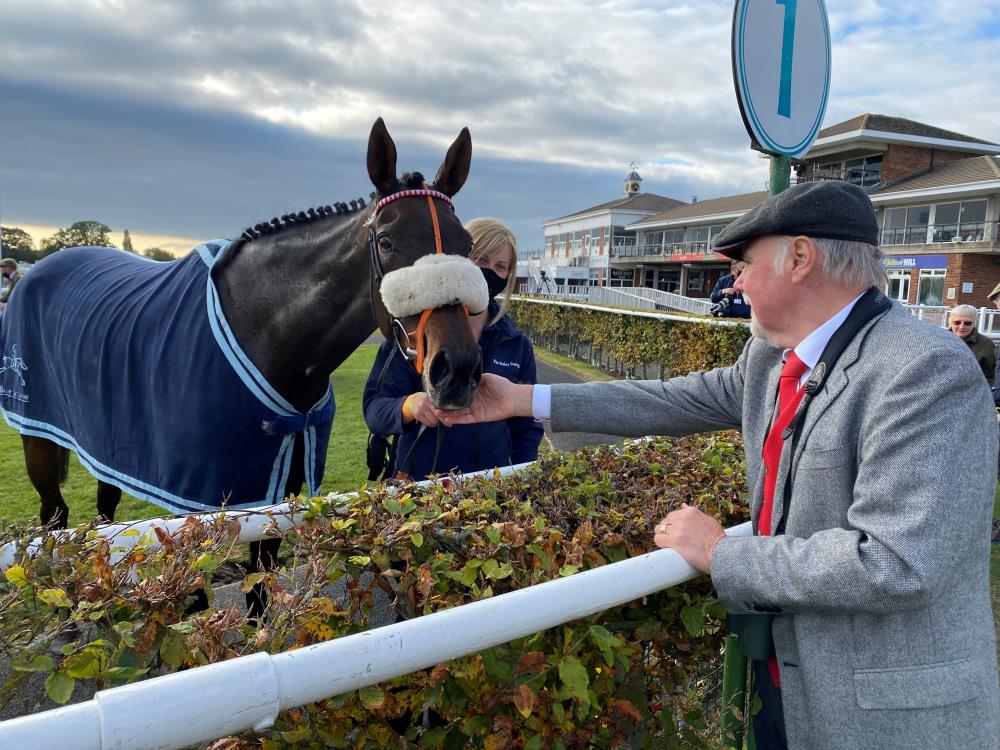 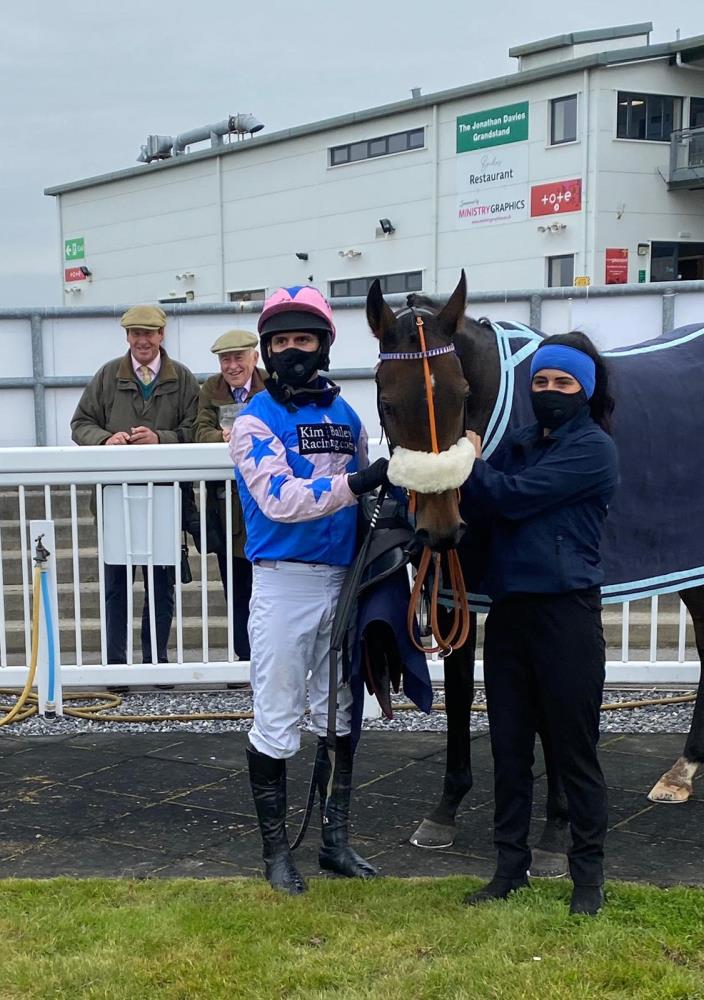 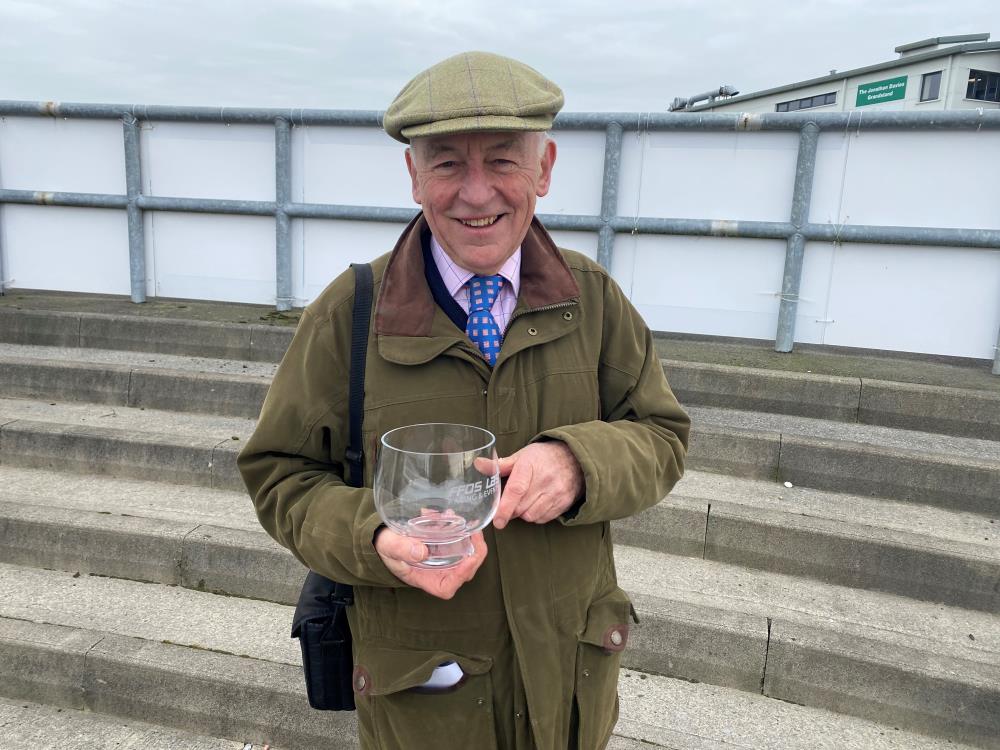 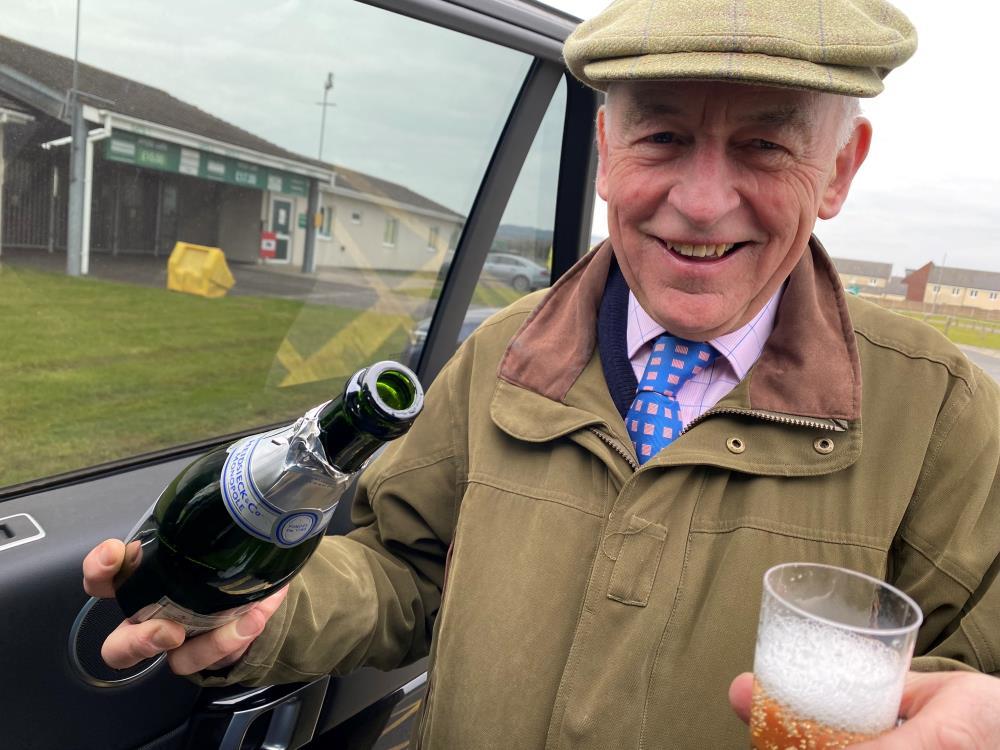 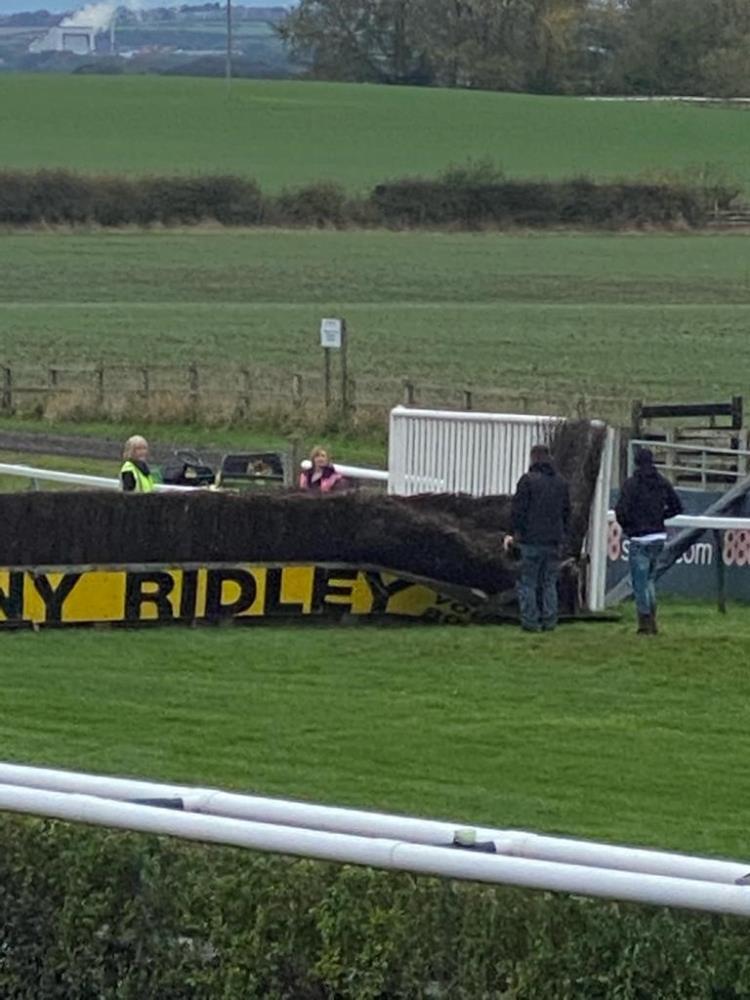